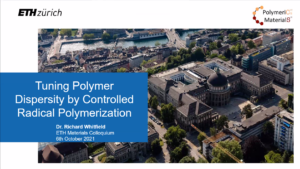 Unlike natural biopolymers, such as DNA and proteins, synthetic polymers have a distribution of different molecular weight species. This distribution is measured by a dispersity value and has a significant influence on polymer properties. It is therefore highly beneficial to develop strategies to systematically tune the dispersity, however, current methods are limited to bimodal molecular weight distributions, adulterated polymer chains, or low end‐group fidelity and rely on feeding reagents, flow‐based, or multicomponent systems. To overcome these limitations, we have developed a simple batch system whereby photo-induced atom transfer radical polymerisation is exploited as a convenient and versatile technique to control the dispersity of both homopolymers and block copolymers. By varying the concentration of the copper complex, a wide range of monomodal molecular weight distributions can be obtained. In all cases, high end‐group fidelity was confirmed by MALDI‐ToF‐MS and exemplified by efficient block copolymer formation. Importantly, our approach utilises ppm levels of copper (as low as 4 ppm), can be tolerant to oxygen and exhibits perfect temporal control, representing a major step forward in tuning polymer dispersity for various applications.

Can 2-D Materials Save Moore’s Law?

Since the first experimental demonstration of a monolayer MoS 2 transistor in 2011, transition metal dichalcogenides (TMDs) have received a wide attention from the scientific community as potential replacement for Silicon FinFETs at the end of the semiconductor roadmap. As graphene, TMDs exhibit excellent electrostatic properties due to their 2-D nature, but contrary to it, they are characterized by large band gaps, while keeping decent mobilities. However, so far, no transistor based on a TMD channel could outperform the Si technology. While this limitation can be partly attributed to technical issues, the TMD bandstructure also explains this behavior: electrons/holes are not fast enough to allow for large ON-state currents. Through density functional theory (DFT), the existence of more than 1,800 2-D materials was recently predicted. Among them there might be components with better transport properties than TMDs. We therefore selected 100 monolayers out of this database, combined DFT and quantum transport to simulate their “current vs. voltage” characteristics, and identified 13 candidates with both n- and p-type ON-state currents larger than what Si FinFETs are expected to deliver in the future. In this talk, I will present the results of this study.

back to Materials Colloquium 2021